The Graham Burrough Trust was founded in 1998 by Graham’s widow, Pam, both to remember him and in gratitude for the care he received. Resources that helped him were invested to make modest grants to support, usually, local mental health projects that would help to lighten the burden for both sufferers and carers.

The man who inspired the Trust was a Dorset man who was blind for 40 years and tackled his physical and related problems with courage and style.

Graham was born in Bridport in 1931 and was diagnosed diabetic in 1933. One of the first generation to survive on insulin, his life expectancy was just 40 years. 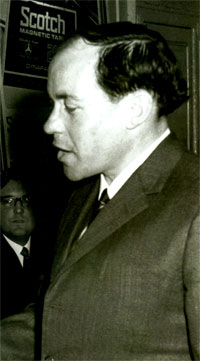 With a boat and an MG, he began to enjoy life. Then his eyesight failed. By 28 he was totally blind. Typically, he met this disaster head on, learned the skills he would need at rehab in Torquay, sold the car, bought a house and acquired a circle of willing helpers, noticeably frequently female!

He became a successful Tax Consultant and a prize-winning wildlife sound recordist, becoming a national winner in 1976. He had a wide network of telephone contacts and a beautiful 'BBC voice'. He constantly researched people, equipment, ways and means to widen both his business and personal interests; to be “normal” in a sighted world.

By his 50th birthday Graham had achieved not only an ‘extra’ 10 years, but also private and professional success. The toll of his illness, several physical crises, and long years of “working three times as hard just to keep up” (his words), so long kept at bay by a doughty and determined will (and how!) began to distress him mentally.

After several very difficult years, in and out of hospital and with little consistent support, he and his equally exhausted wife found refuge and loving care for him at The Retreat in York. A long way from home, but offering the asylum and total care that he needed and deserved, and the right of every hurt body and mind.

Graham fought on for another 10 years with courage and unforgettable style. He died in York Hospital in October 1997. He was 66 and had truly beaten the odds.