Peter Marsden, a volunteer with the village hall committee for more than 30 years, told us about the hall and what it means to the people of Galhampton.

“Myself and my wife have lived in Galhampton for 34 years now and got involved with the committee soon after moving here, so the village means a lot to us. When we first moved here, people went to work, came home, shut their front door and that was that. Gradually, the community has built up to become very strong. We used to have a monthly village meeting and had to leaflet the whole village beforehand – and even then we’d only get 20 people turn up. These days we don’t need to leaflet. We don’t even need to announce it and we get about 60 or 70 people turn up. Because we have that strong community, now. 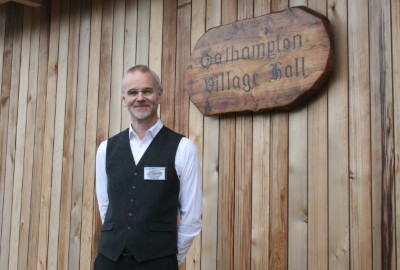 We started fundraising because the old village hall was not economically repairable. The roof was in danger of collapsing, so we had to put two supporting posts in to keep it up, which reduced the functionality of the hall for more active groups such as community dances and the village playgroup group. We decided to knock the old hall down and raise funds to build a new one.

The fundraising took a long time; we initially applied to the Lottery, who gave us about three-quarters of the funding after a two or three year process. Then we built on that and approached around nine other funders for grants, including Somerset Community Foundation.

We also raised £90,000 ourselves by running a music festival called Party in the Park for 11 years. It was a great event, with around 1,500 people on the village playing field and lots of bands; a real community event. The whole village got involved and we were all very proud of what we were doing.

The new hall is a huge asset for us and very much the focal point for the village. We have a lot of events and groups going on here with something for everyone. When I last checked, we had more than 20 different regular activities including a bridge club, toddler groups and a choir. We also have a weekly GP surgery in our consulting room.

Community, to me, means that people in the village support each other. It’s like a hidden network. People will help out a neighbour if they are not very well, do their shopping for them, take them out. We have a couple in the village who pick up prescriptions for older people who can’t get out.
Hopefully as new people move into the village they’ll join in, too. We want to keep that community spirit going for future generations to come.”