We are counting down the hours until internationally-acclaimed choir Tenebrae take to the stage in Wells Cathedral to perform 'A Hymn of Heavenly Beauty' in aid of the Foundation. The performance starts at 7:30pm, with doors opening at 7:00pm.

Widely regarded as one of the world’s finest vocal ensembles and described as ‘phenomenal’ by The Times, Tenebrae will be performing their programme ‘A Hymn of Heavenly Beauty’, which features some of the most beautiful choral works ever written ranging from the masters of the Renaissance through to modern day luminaries such as John Tavener.

Tenebrae has appeared at some of the world’s most prestigious festivals including the BBC Proms, City of London Festival, Edinburgh International Festival, Three Choirs Festival and Montreux Choral Festival (Switzerland). The concert at Wells Cathedral represents a rare chance to see a choir renowned for its passion and precision right here in Somerset, so please don't miss this chance to see them perform. 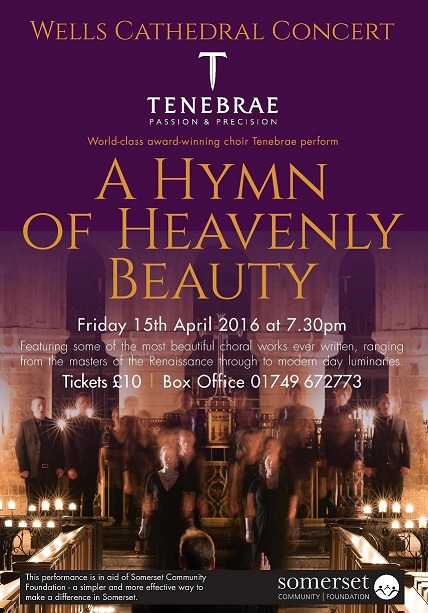