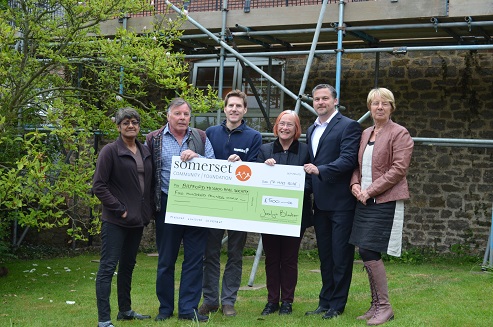 In 2009 the Myakka Grass Root Fund was set up with Somerset Community Foundation by the Wincanton fair trade furniture company to help support the local community within the South Somerset area.

The most recent project to benefit from the Myakka Grass Root Fund has been the preservation of Bayford Hall, the only community facility serving the small villages of Bayford and Stoke Trister.

The former chapel was originally built in the late 1880s and, up until last year, had been in Trust with the Bath & Wells Diocese. However, in 2015 the Diocese decided that the major renovations required meant it was non-viable to continue to maintain the building.

A small group met to assess the future of the hall and following a survey within the parish, it was overwhelmingly decided that Bayford should own and retain it as a community facility. The Bayford Mission Hall Society is now fundraising to tackle the repairs necessary to make the hall safe and user-friendly, including providing disabled access.

On presenting a cheque to the Bayford Mission Hall Society with SCF Programmes Manager Jocelyn Blacker, Simon Whitehead, Director of Myakka, said: “this is exactly the kind of project that our Grass Root Fund was set up to support. The hall enriches the lives of all the villagers:  Bayford has poor transport links and residents, particularly the elderly, rely on local services to feel part of the community. The Society is a great example of what can be achieved when everyone works together. ”

Adrian Goldsack, Bayford Mission Hall Society Chairman, said: “The roof has been repaired and we start the conversion work at the end of the month.  We have still to raise money for the project but our target is to have it all completed by Christmas.”