Chairman of SCF, Jane Barrie, spoke about the past year, what SCF were currently doing, and their plans for the future.

Five groups who received funding from SCF in 2016/17 showcased their services to the community on the night with informative displays: Mind in Taunton and West Somerset; North Taunton Partnership; PROMISEworks; SLaMS; and Trident Youth and Community Centre. A representative from each group spoke for a few minutes about the work they do and how SCF has helped them.

Following the speeches, Robert Peto, Chairman of PROMISEworks said: "This evening has been a great opportunity to demonstrate what we do and also to express our gratitude to SCF for the vital financial support they’ve given us as a start-up charity. An enjoyable, instructive and worthwhile evening; it was a privilege to have been invited."

Colin Gorton, Chairman of SLaMS, said: “Thanks for a great evening, and for the opportunity to "shed" some light on what SLaMS and Men's Sheds in general are doing. We’ve also been able to thank SCF for supporting us in our start-up year.”

Keynote speaker Stephen Dawson, venture philanthropist, delivered his talk: ‘From Madagascar to Somerset – A Philanthropic Journey’, where he spoke about his overseas work. He also spoke about his work as a trustee for Sanitation First: a charity which provides GroSan toilets in the developing world; as Chair of The Galleries shop and café: a village shop and café funded, owned and run by the community; and as co-founder of Impetus Trust: the first venture philanthropy organisation in the UK. 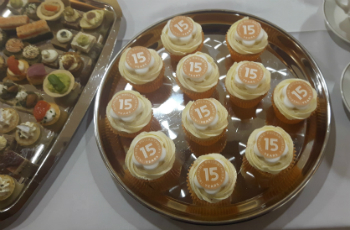 Tim Walker, a trustee of SCF, spoke about the Clarke Willmott Fund and the company’s relationship with SCF and said after the event: “Somerset Community Foundation’s Annual Celebration highlights the significant influence that SCF now has on our community here in Somerset, and the need for further investment from donors to support its activities to meet a growing need. It has been a well-attended and excellent evening.”

Justin Sargent, CEO of Somerset Community Foundation, chaired the speeches where he welcomed everyone to the celebration and SCF’s 15th birthday party. He went on to speak about how everyone present that night had one thing in common: a shared mission to make their local communities more vibrant and to transform peoples’ lives. He also spoke about SCF’s Theory of Change before thanking everyone for coming and encouraging them to visit the display stands and enjoy the canapes and special birthday cupcakes.

The event was kindly sponsored by Clarke Willmott LLP.

Our Theory of Change