Somerset Community Foundation (SCF) recently welcomed Her Royal Highness The Countess of Wessex to their offices on The Royal Bath and West Showground.

The Countess, who arrived by Royal helicopter, met with SCF trustees and senior staff where they discussed how the lack of social mobility in Somerset was a growing problem and among the worst in the country, and ways that SCF will be tackling this and other issues that young people in our county face today. The Countess then met with representatives from three groups that provide opportunities for disadvantaged young people in our communities, all of whom have previously received grant funding from SCF: 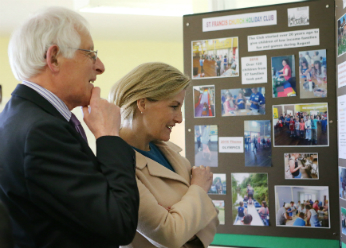 Gerald Swayne, Churchwarden and senior organiser at Bridgwater-based St Francis Church Holiday Club along with Madison Simmons, age 14, who has been attending the Club since she was 7 years old and who is now a Junior Leader;

Dave Jackson, Director of Operations, who runs YMCA Somerset Coast’s social enterprise, The Beach Hotel, in Minehead, along with Connor Bazley, age 19, who had struggled to find a local college where he could peruse his passion for catering, and is now an apprentice chef at the hotel;

Jock Hedderwick, from PROMISEworks, a mentoring service for disadvantaged young people in Somerset, along with Aaron Rogers, age 21, his mentee of over 6 years, since he and his mum were evicted from their home.

The Countess spent time with the groups, asking questions about each organisation in turn. She particularly enjoyed talking with the young people, listening to their individual stories and finding out how the groups had supported them.

During her Somerset tour, The Countess also went to Taunton where she visited Musgrove Park Hospital, Somerset County Cricket Club, and Queen’s College, before arriving by helicopter at her next stop, the Royal Bath and West Showground where, as Vice Patron, the Countess also visited the newly built Rural Enterprise Centre.

If you run a local community project and would like to find out more about grant funding, please call Somerset Community Foundation on: 01749 344949 or visit: www.somersetcf.org.uk