Mental health charities in Somerset will receive a long-term boost thanks to the generosity of the founder and trustees of the Graham Burrough Charitable Trust who have chosen to wind the charity up after 20 years of helping people living with mental health problems.

The trust was originally established in memory of Graham Burrough after he died in 1997 aged 66 after a lifetime of amazing willpower and bravery to overcome illness and enjoy a very successful life. To find out more about Graham Burrough click here. 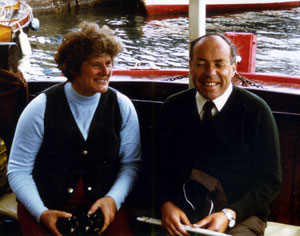 After running the trust for almost twenty years, during which time it supported hundreds of mental health charities with around £500,000 in grants, Graham’s widow, Pam, and her fellow trustees, agreed to wind the charity up.

Somerset Community Foundation was approached by the trust’s solicitors in 2016 and, working with our colleagues at Dorset Community Foundation, we were able to offer a long-term future for the Fund. The trust has now been split between the two Foundations, each receiving over £300,000. The funds will continue to be invested as part of our endowments and the income will be used to support local grassroots projects helping people living with mental health illnesses.

Pam Burrough said: “I am very happy indeed that such a viable future for the trust has been established. I wish I had discovered just how the Foundation works at an earlier stage in our decision making. I feel very confident that Graham’s legacy will be administered wisely and will continue, in his name, to help and cheer many others suffering mental health problems. He was a brave soul, overcoming blindness and many set-backs. I wish Somerset Community Foundation great success in all their endeavours.”

Although we never knew Graham, we are inspired by his life story and it is our privilege to continue supporting great causes in his name, helping local people today and far into the future.