Wadworth, the Devizes-based brewer, has donated £2,046 to Somerset Community Foundation to help the flood affected communities on the Somerset levels. Wadworth Chairman and Managing Director, Charles Bartholomew, presented the cheque to Somerset Community Foundation Chief Executive, Justin Sargent, at The Rose and Crown in East Lyng, a village totally cut off during the peak of the flooding.

The money was raised by sales of more than forty thousand pints of Wadworth 6X at sixteen Wadworth pubs around Somerset, Bristol and west Wiltshire. For every pint of 6X sold in these pubs during March, April and May this year, Wadworth donated five pence to the fund. 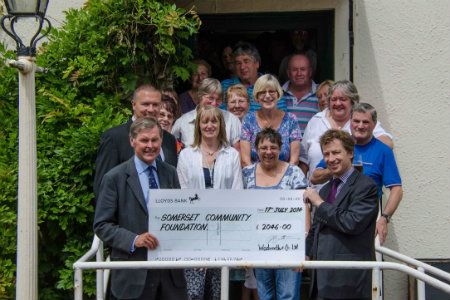 “The floods were a desperate time for the communities around our pubs and we were determined to help,” explained Charles Bartholomew. We launched our fundraising in February with the twin aims of raising as much money as possible, and also of keeping the fundraising for the Somerset Community Foundation in the minds of the public long after the floods had receded. This is important as there is still so much to do to help those many people who lost so much in the unprecedented high water levels.”

“This donation from Wadworth and the customers of Wadworth’s pubs show how the whole community across Somerset and Wiltshire wants to help those who have been affected by the floods. It is a much appreciated contribution from a company with a visible and welcoming presence at the heart of so many Somerset communities,” said Justin Sargent. “At a time when the sun is shining it is important to remember that for lots of people, their journey to recovery in just beginning.”