Village chooses SCF as charity of the year

Somerset Community Foundation’s vision for Somerset is a county of vibrant, inclusive communities where voluntary organisations and social enterprises thrive, transforming and enhancing the lives of the most disadvantaged people.

The spirit of this vision was shown recently when the village of Henton held its annual Summer Fete recently, raising over £3,000 for the village church and £320 for its chosen charity of the year, Somerset Community Foundation. 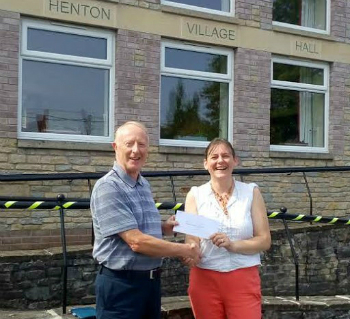 Henton Village Fete Committee chose Somerset Community Foundation as their chosen charity for 2018 after hearing about the Surviving Winter campaign, which is run by SCF. The campaign asks people to donate their Winter Fuel Payment if they don’t need it, and the funds raised provide grants to vulnerable people in Somerset to help keep them warm and connected. Ian Tinsley, from the Henton Village Fete Committee said: “I was so pleased when it was agreed that we would support Somerset Community Foundation this year; I really like the fact they are a local charity that helps people in Somerset. The Surviving Winter campaign makes so much sense and is a really good example of how charity begins at home.”

The fete was opened by Tessa Munt this year and attracted many hundreds of people from the local community.

Highlights included stalls selling Somerset produce and crafts, face painting, a dog show and the Mendip Brass Band.  Ian went on to say: “Our fete is a tradition for the villages of Henton, Yardley and Bleadney - also known collectively as the Mill Stream Villages – and has been running for many years. Although it’s hard work, the reward is seeing families and other members of our community mixing together and enjoying themselves, while also raising money for good causes. It brings our community together and also helps to support other communities by donating some of the funds to SCF.”

Chief Executive of SCF, Justin Sargent, said: “We are delighted to be chosen by the Henton Village Fete Committee as this year’s charity.  Events that bring communities together can really help to reduce isolation, as do community spaces such as village halls, which have an important place in our rural communities.  Choosing to take positive action in their community, while at the same time wanting to help other Somerset communities, is inspiring”.

The Village Hall opened in 2000 and is now a focal point for Henton. It hosts many other activities including weekly sessions from the Somerset brain injury charity Headway, a book lending library, pilates, Henton and District Gardening Club, Henton Short Mat Bowls Club and The Women’s Institute.
Return